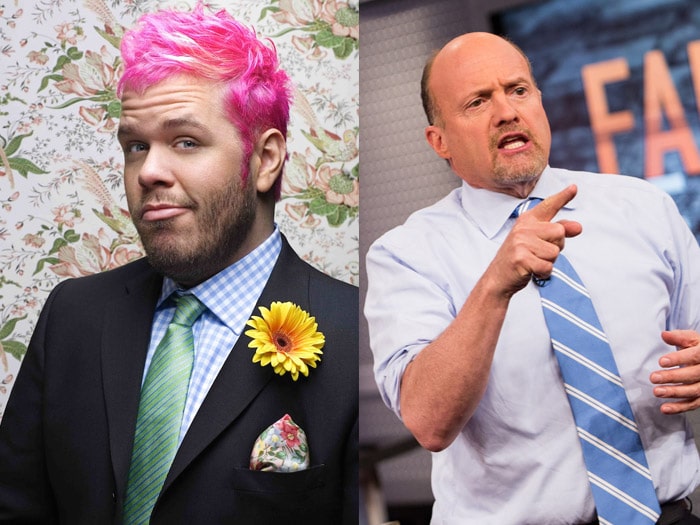 Both Jim Cramer and Perez Hilton are iconic personal brands to their respective audiences, brands launched on the Internet and leveraged into off-line profitable empires. Personal brands are no less valuable or profitable than pure product brands.

Back in the “dark” ages (before the Internet), the notion of an individual as an instant brand was unheard of. Celebrities were limited to glamorous actors or sports heroes, on to whom we often projected our fantasies. Then came reality television, where we became voyeurs into the real, and sometime tragic, lives of others willing to expose themselves for 15 minutes of fame. And then, the scripted reality celebrity emerged. The audience is manipulated with story lines created for the reality celebrity, many of whom have leveraged their fame into iconic brands in the outside world, aided by social media most notably FB and Twitter. Who is a better example than The Kardashians?

The Internet ushered in the era of the individual domain name: mypersonalbrand.com.

“MyPersonalBrand.com” has enabled millions of individuals to market themselves, their products, services, and personalities through Facebook, Twitter, websites and personal blogs. Celebrity exists broadly in every culture. On a macro level, there are individuals whose expertise approaches celebrity in sports, professions, industries and now online.

Blogger and celebrity gossip columnist Mario Armando Lavandeira, Jr., better known as Perez Hilton (a play upon Paris Hilton) has created one of the most trafficked personal websites in the world. Born in Miami to Cuban parents, Perez has taken individual celebrity to new heights, creating an empire in the process. How? He draws controversy for his cutting remarks, outings of closeted gay celebrities, and has defended countless law suits for copyright theft of photos, content, and music. All of this has created even greater celebrity for Perez and more traffic to his site. Perez has appeared in many television shows, music videos, and hosts his own radio show.

Some larger than life figures began in more traditional venues but used the power of the Internet to leverage themselves into a broader following. Jim Cramer, CNBC contributor and host of Mad Money, comes to mind as an interesting personal brand created by a financial professional turned celebrity. Jim has created “Cramerica” and become known as the “little man’s financial advisor.” Millions watch his daily CNBC show teaching individuals how to invest in a unique and flamboyant style never before seen in his profession. Jim struck a nerve for the retail investor who is largely shut out of the financial world.

Jim created a persona: brash, outspoken, smart, fun loving, and accessible to the everyday man or woman. He clearly considered and focused not only upon the content of his message, but equally important, to whom he is speaking, and how he will be perceived and viewed. While some of the established financial community would belittle Jim, his target audience loves him and what he has done for their ability to access information.

Cramer, a Harvard lawyer by training, always had a passion for journalism, having edited the Harvard Law Review. Cramer’s celebrity began largely through the early Internet site he founded, TheStreet.com featuring a host of contributing experts in various areas of expertise. There, his articles, blogs and video interviews developed a large following and caught the attention of CNBC, where he is a regularly featured contributor.

Jim Cramer and Perez Hilton are terrific case studies of individuals who cultivated their passion, acting upon that passion to speak out—only to learn there was audience listening. What’s your personal brand?